Getting online data to offline communities

This has become possible through the huge range of digital information now available online. While much of that information is presented online and sometimes in newspapers and magazines, what about communities who don’t have much access to the internet or even printed media?

Are these communities, often poor and rural, simply going to miss out on the results and benefits of data journalism? Not necessarily. onMedia’s Kyle James looks at a project in Cambodia that has been linking online and offline communities – with promising results.

END_OF_DOCUMENT_TOKEN_TO_BE_REPLACED

Coding for journalists: 10 hottest websites to teach yourself to code

Should journalists learn computer code? That’s a controversial question at the moment. The general consensus seems to be that today’s journalists need at least a basic level of technical literacy so when they team up with developers, they can better understand the language they speak. To get journalists up to speed, onMedia has prepared an overview of the best websites to help learn how to write code without having to turn into a hard-core programmer.

END_OF_DOCUMENT_TOKEN_TO_BE_REPLACED

Twelve renowned journalists from Latin America and Germany are coming together to explore the future of data journalism. Under the motto “Public Data Goes Social”, the journalists and open data experts will meet for three days in Buenos Aires to discuss the most burning issues in the booming field of data journalism.

The talks are part of a Media Dialogue organized by DW Akademie and supported by Germany’s Federal Foreign Office. You can follow the event, which runs from 13-15 November, on Twitter  via @dw akademie and the hashtag #mdba.

There is a thriving community of data journalists in Germany and Latin America and the two regions are building a reputation for innovations in the field. Read more for a short introduction to the Media Dialogue participants.

END_OF_DOCUMENT_TOKEN_TO_BE_REPLACED

Justin Arenstein: Hacks and hackers working together in Africa

As new media continues to reshape the world of journalism, newsrooms need to reinvent themselves to stay relevant. But not all journalists and organizations have the technological skills to become innovative news providers. This is where Hacks/Hackers is stepping in to fill the gap. Hacks/Hackers is a grassroots journalism organization which brings together journalists and software developers. Originating in the United States, chapters of the movement are rapidly spreading around the globe, including Africa. The idea is to hook up hackers (developers and software writers) who sort and visualize information together with hacks (journalists) who are excited about using new technology to tell great stories.

Justin Arenstein is one of the driving figures behind the Hacks/Hackers movement in Africa, where there are currently 13 chapters. Arenstein, a South African, is currently a Knight International Journalism Fellow in charge of the Digital Innovation Program at the Africa Media Initiative. He also is a consulting strategist for Google on data and digital journalism issues (Twitter: @justinarenstein). DW Akademie’s Kate Hairsine talked to him about Hacks/Hackers in Africa.

END_OF_DOCUMENT_TOKEN_TO_BE_REPLACED

Checking the facts in Africa

The idea of Africa Check is straightforward. Investigate claims made in public; check the facts; and, publish the findings.

Africa Check was launched in 2012, and is a non-profit organisation led by the media development agency AFP Foundation and the Journalism Department of the University of the Witwatersrand in Johannesburg.

The organisation not only examines the public claims of politicians, leaders in civil society, government agencies and NGOs, but also checks the facts journalists use in their stories.

Peter Cunliffe-Jones of the AFP Foundation is the Director of Africa Check and says getting the facts right is the “essence” of journalism. But under the pressure to feed 24 hour news, and working across more topics, journalist may feel they “don’t have the time and the expertise, or even know where to look” to verify information.

Reading an Africa Check report is a little bit like a mini-lesson in the basics of journalism. You also see that this project has the potential to have a high impact on African media and perhaps serve as a model in other countries or regions.

END_OF_DOCUMENT_TOKEN_TO_BE_REPLACED

Last year, the International Consortium of Investigative Journalists (ICIJ) in Washington received a huge data set consisting of 2.5 million documents on tax havens from unknown sources. The documents contain 130,000 names of people from 170 countries suspected of fraud, among them oligarchs, arms dealers and criminal financial investors. Apart from that, there were more than two million emails and lists of 122,000 covert companies and trusts from respective tax havens. The unprecedented research that followed brought together media outlets from 46 countries which set themselves to check the data. Here in Germany, the Süddeutsche Zeitung, a leading newspaper, was involved in the process of analyzing the data. In this post editor Bastian Brinkmann writes how data experts helped to analyze the enormous volumes of data.

END_OF_DOCUMENT_TOKEN_TO_BE_REPLACED

Tools and Apps for Journalists Working with Data

Journalists use statistics on a nearly daily basis, but visualizing data is a different story. With a boom in tools and apps to generate infographics and more, this could be changing. One such tool is Datawrapper, developed by Deutsche Welle New Media staffer Mirko Lorenz. “It’s a tool for getting started with data-driven journalism,” Lorenz said. He came up with the idea, and developed it with two programmers. “We didn’t just want to make showy charts, it’s really about the right diagram for the data at hand,” Lorenz said.

Editing desks around the world have been experimenting with the tool, including the Guardian data blog, Le Monde, a Dortmund regional newspaper – and of course, the Deutsche Welle. Datawrapper is open-source, and can be freely downloaded – it’s available in English, German and French.

In an interview with DW Akademie, Lorenz clarified what he thinks the “right” portrayal of data is all about, and explained the advantages of Datawrapper for journalists.

END_OF_DOCUMENT_TOKEN_TO_BE_REPLACED

Data Visualisation and Information Graphics: “Functional like a hammer”

The visualisation of information is one of the hot topics on the internet at the moment. These days there are more and more tools available which allow anyone to produce information graphics. The graphics that people are sending around via social network sites are often colourful, with big letters and fun icons – but they normally don’t convey much information.

So, what do good information graphics and data visualisations have in common?

Alberto Cairo has been interested in this issue for more than 15 years. He’s a big name in the international scene of graphic designers involved in information communication. In September his book “The Functional Art – an introduction to Information Graphics and Visualization“ is due to hit stores. As part of the project, Cairo interviewed a number of big names from the industry and he explains in detail the important aspects of professional information graphics.

“They should be functional like hammers, multi-layered as onions, and beautiful and true as equations or efficient scientific theories,” he says. In a number of chapters of his book he describes the basics of perception and cognitive psychology, which every graphic designer and journalist should know.

END_OF_DOCUMENT_TOKEN_TO_BE_REPLACED 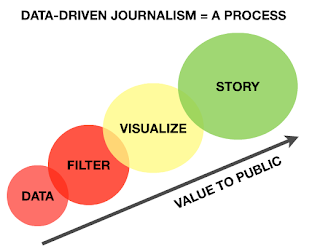 A decade ago the use of extensive databases for reporting was difficult, time-consuming and expensive. Databases were mainly used by investigative journalists. The situation is very different today. Entire collections of data are now available online, often for free. They are easy to browse thanks to open source navigation tools. Lorenz Matzat wrote this guest blog post on data driven journalism.